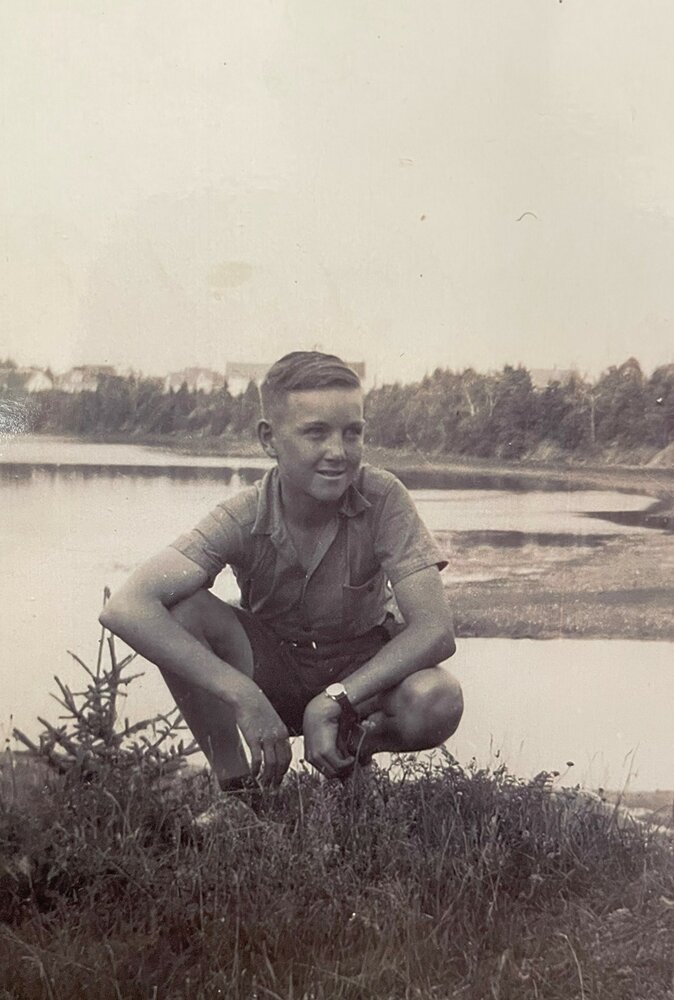 Please share a memory of Walter to include in a keepsake book for family and friends.
View Tribute Book
Walter Gerald (Gerry) Miller, 93, died peacefully with his family by his side on September 11, 2022, in Santa Rosa Beach, FL. Born in Sheet Harbour, Nova Scotia, on January 29, 1929, Gerry was the son of the late Ella (Behie) and Walter Miller. He graduated from St. F.X. University and Nova Scotia Technical College with a BS degree in Engineering. While working in Halifax, he met Elizabeth (Betty) Miller. The two were married on May 18, 1953. Betty precedes him in death. Gerry was an amazing father to seven children, who all survive. Michael Miller of St. Petersburg, FL; Christine Powers of Santa Rosa Beach, FL; Peter Miller of Washington, PA; Mark Miller of Centennial, CO; David Miller of Oil City, PA; Margaret Womacks of Cincinnati, OH; and Marie Perry of Ponte Vedra Beach, FL. Gerry was also a loving Papa to 18 grandchildren and Old Papa to many great-grandchildren. He is also survived by his sister, Helen Miller, of Sheet Harbour, NS, and many nieces, nephews, great nieces, and great-nephews. Gerry was an Engineer by trade. He also served in the Canadian Army and earned his Major ranking while serving. He was the Chief Engineer at Enamel & Heating while living in Amherst, Nova Scotia. In 1967, he moved his family to Oil City, PA, where they lived for 40 years. He was the VP of Engineering at Franklin Steel Co. until he retired in 1993. In addition to his successful career, he was an active member of St. Stephen’s Church in Oil City. He loved working the food booth at the Oil Heritage Festival every year and helping Betty decorate their large home for tours. When they moved to Santa Rosa Beach in 2006, Gerry became a Hospitality Minister at St. Rita’s Catholic Church, where he enjoyed his faithful community. Gerry loved the outdoors and had many hobbies that allowed him to enjoy nature. He loved to golf, snowmobile, hunt with his sons and had one of the best vegetable gardens in Oil City. He enjoyed traveling with his family and spending time with his children, grandchildren, and great-grandchildren. One of his favorite things in life was bouncing a child on his knee with a special song. Gerry was also a craftsman, making sailboats, crosses, and other ornaments out of driftwood. He was always very active, loved to exercise daily and go for long walks. A funeral mass was held 10:00AM on Wednesday, September 28, at St. Rita’s Catholic Church in Santa Rosa Beach. Following mass, there was a burial service at the Historic Gulf Cemetery. In lieu of flowers, please donate in Gerry’s name to St. Rita’s St. Vincent DePaul or to St. Stephen’s Catholic Charities in Oil City, PA.
To plant a beautiful memorial tree in memory of Walter Miller, please visit our Tree Store

A Memorial Tree was planted for Walter
We are deeply sorry for your loss ~ the staff at D.S. Crowell & Son Funeral Home Ltd
Join in honoring their life - plant a memorial tree
Online Memory & Photo Sharing Event
Online Event
About this Event

Look inside to read what others have shared
Family and friends are coming together online to create a special keepsake. Every memory left on the online obituary will be automatically included in this book.
View Tribute Book
Services for Walter Miller
There are no events scheduled. You can still show your support by planting a tree in memory of Walter Miller.
Plant a tree in memory of Walter
Share Your Memory of
Walter
Upload Your Memory View All Memories
Be the first to upload a memory!
Share A Memory
Plant a Tree