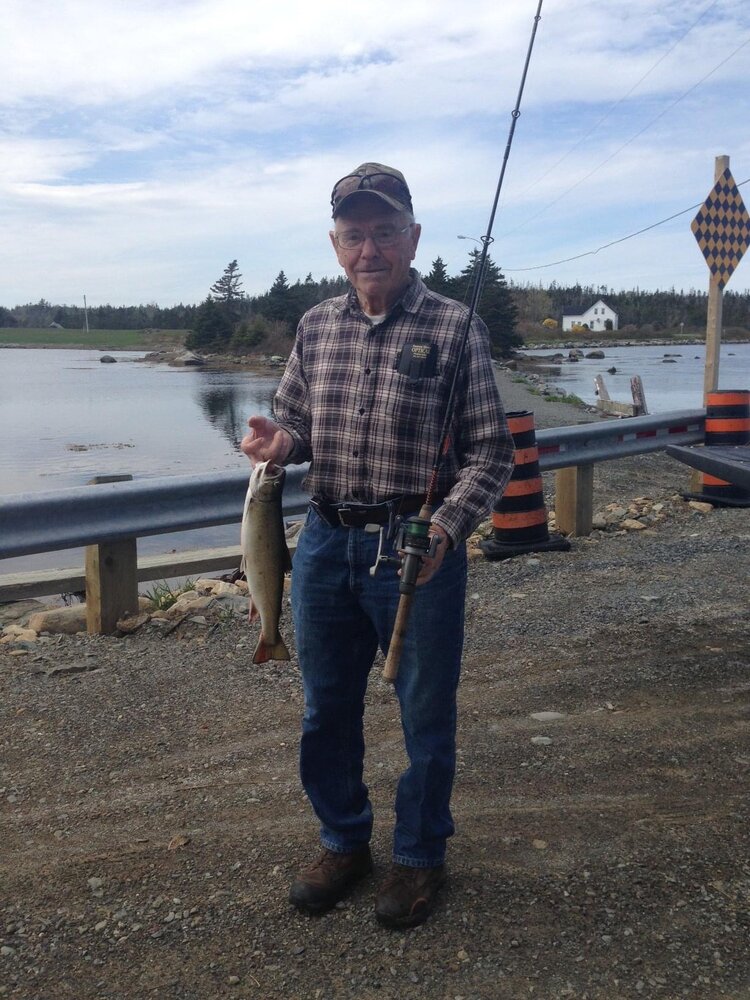 Please share a memory of Garnet to include in a keepsake book for family and friends.
View Tribute Book
On July 8, 2022, Garnet Earl Snow of Harrigan Cove decided to move on. He was in his 94th year, so we guess he figured it was time. He was a son of the late Earl and Rita (Barkhouse) Snow. He is survived by wife Bonita, who for 68 years, cooked for him, baked for him, taught school, raised 5 kids and listened to his endless stories. Garnet was born on Snow’s Island in Harrigan Cove on Feb. 7, 1929. He was inherently attached to the ocean. He fished commercially for lobster for 50 years since he was 14. He started a mink ranch in Harrigan Cove in 1966. Garnet worked very hard all his life, but always had time for a visit and a chat. Most everything in his life smelled mildly of mink or fish. He raised award winning mink and was known and respected by the ranching industry throughout North America. He decided to retire from mink ranching when he was 84. He never retired from his interest in it or lobster fishing. During his heydays of longlining, he commonly had his 8 year old son Wayne splitting codfish and carving out tongues and cheeks. He enjoyed having his sons Rodney and Christopher to work like machines on the farm since they were barely teenagers. “Be careful with that!” was the extent of his safety advice on all things dangerous. Child labour seemed a perfectly sensible resource for his ventures. He made sure his kids were raised with enough respect and care that they all turned out to be pretty good people. Thank you Dad. He never stopped telling stories about his life and experiences growing up in rural coastal Nova Scotia. Everyone who knew him has a complete, unabridged history of the area, told through the eyes of a clever, sometimes mischievous young boy observing the sorts of whimsical characters from all the surrounding communities. The kind of people only rural Nova Scotia can produce. In his words “Everyone was poor, so money didn’t matter”. He is also survived by his children Wayne (Collette), Lisa (Ulf), Gail, Christopher (Rhea), grandchildren, Ryan, Holly, Daniel, Ronja, Nicholas, Justin, Ethan, Jenna, Chassidy, Michael and Billy. Also brother Daly (Suzanne). Many, many longtime friends of all ages will miss him. Kindness was his most enduring quality. Just a really good guy. Garnet was predeceased by son Rodney, sister Beryl and brother Bobby. Funeral or graveside service will be held at a later date. A drop-in will be held on Tuesday July 12, 2022 at the home of Garnet and Bonita in Harrigan Cove from 2-4.
To plant a beautiful memorial tree in memory of Garnet Snow, please visit our Tree Store
Tuesday
12
July

Look inside to read what others have shared
Family and friends are coming together online to create a special keepsake. Every memory left on the online obituary will be automatically included in this book.
View Tribute Book
Share Your Memory of
Garnet
Upload Your Memory View All Memories
Be the first to upload a memory!
Share A Memory
Plant a Tree