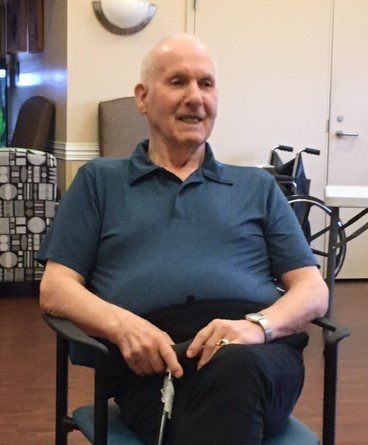 It is with heavy hearts that we announce the passing of our Dad, Harold Milford Dorey (Mickey) age 82 on April 30th 2021 at Harbourview Lodge Sheet Harbour with his loving daughter, son, and grandson by his side. Born September 5th 1938 in Halifax NS, he was the son of the late Harold and Lillian (Newcombe) Dorey. Mickey served in the Army (Blackwatch) division from 1957-1960, he was a member of the Royal Canadian Legion, he worked in the flooring business and at the Texaco Refinery, then Imperial Oil in Eastern Passage, then in his later years as a Commissioner. He was an avid Crib player, and never missed a chance to go to all the card parties in the surrounding areas, he also enjoyed hunting in his earlier years, he loved his children and grandchildren very much. He is survived by his children, Dennis (Kim), Calgary, Wanda Nicholson (Mark), Pleasant Harbour, Dana, Owls Head, brother Lawrence, Ontario, sisters Joan, Eastern Passage, Barbara, Ottawa, and Linda, Edmonton. Grandsons Daniel (Beth) Calgary, Conner, Calgary, Devin, Owls Head, granddaughters Lindsay, Calgary and Jamie, Halifax, great grandchildren Ava and Declan, Several nieces and nephews. Mickey was predeceased by his eldest daughter Angela, brother Arthur and sisters June and Yvonne. Cremation has taken place under the direction of DS Crowell & Son Funeral Home in Sheet Harbour, because of the ongoing covid restrictions a service will be held at a later date, We would like to thank all the staff of the Harbourview Lodge and Eastern Shore Memorial Hospital for the loving care that was given to our Dad, In lieu of flowers a donations may be made in his name to Harbourview Lodge or the Eastern Shore Memorial Hospital. Online condolences may be directed to www.crowellsfuneralhome.ca
To plant a tree in memory of Harold Dorey, please visit Tribute Store
Services for Harold Dorey
There are no events scheduled. You can still show your support by planting a tree in memory of Harold Dorey.
Visit the Tribute Store
Share Your Memory of
Harold
Upload Your Memory View All Memories
Be the first to upload a memory!
Share A Memory
Plant a Tree