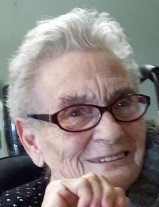 Please share a memory of Doris to include in a keepsake book for family and friends.
View Tribute Book
Jewers, Doris Emily “Dottie”- following a lengthy battle with dementia, Doris Emily (Dottie) Jewers (nee Smith) died on November 14, 2020 in Harbourview Lodge, Sheet Harbour. Dottie was born in Moser River on December 29, 1928; the eldest child of Bertha Kate (Moser) and Karl Freeman Smith. She is survived by sons, David (Linda), Philip (Bonnie), Bradford, Randall (Rachael), daughter Carla (Tim) Baker, sister Muriel Chittick and sister-in-law Earline Smith. Also, she is survived by eight grandchildren, seven great grandchildren and her beloved kitty, Dollie. She was predeceased by her husband Neil, her brothers, Bernard and Cecil and sister Norma Lowe. Dottie started her career as a teacher/principal in the schools in the local community. She always expressed the joy she felt, when primary students began to read independently. Dottie was always concerned about the health and welfare of others in the community and this continued well into her 80’s. She was constantly sourcing and applying for monies that would, for example, either fund summer employment for students, or allow upgrades to senior’s residences, so that they could continue to live at home. She was the parish warden, treasurer, Anglican Synod delegate, served on the original Duncan MacMillan Nursing Home Board and was a member of the local home and school association. She also initiated palliative care in the community in the 1970’s, for one of her young friends. She served on the Nova Scotia Seniors Secretariat, was the Life Line installer for elders in the community and was one of the bereavement counselors with the RCMP during the Swissair disaster. She travelled locally, provincially and nationally to attend the many boards and committees she represented. Dottie and friends established a knitting company called Seagull Fashions that designed and produced sweaters, that were sold to Canadian retailers. She was an excellent cook and shared her results with the community. She loved to sew, designing many outfits for her family, as well as graduation dresses for local girls. She was an avid reader and gardener and was always physically active; walking many miles per day, as well as, skiing, skating and bowling. Her academic ability enabled her to fill out complicated income tax forms and applications for members of the community. Her family extends sincere thanks to her devoted caregivers, Stephanie and Susan, who afforded Dottie the opportunity to remain at home and involved in the community; they became an extension of her family. Also, we pay special tribute to Dr. Chris MacKnight, Memory Disability Clinic (NSHA), who was an integral part of Dottie’s journey for the past eight years. We also recognize the support provided to Dottie by the staff of Eastern Shore Memorial Hospital and Harbourview Lodge. Memorial donations can be made to Harbourview Lodge. A funeral service will be held at a later date in the spring. Online condolences may be directed to: www.crowellsfuneralhome.ca
To plant a beautiful memorial tree in memory of Doris Jewers, please visit our Tree Store
Tuesday
16
August

Look inside to read what others have shared
Family and friends are coming together online to create a special keepsake. Every memory left on the online obituary will be automatically included in this book.
View Tribute Book
Share A Memory
Plant a Tree