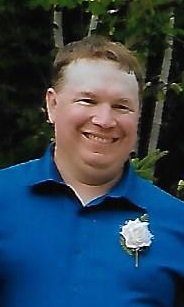 It is with great sadness that we announce the passing of a beloved husband, father, grandfather, son, brother and friend. Blaine Dennis Hubley born March 13th, 1978 to proud parents Marie Duncan and Dennis Hubley passed away suddenly at home on August 23, 2020 at the age of 42. Blaine was best known for his immense passion for life and laughter and will be forever remembered by his family and friends as that one guy who could always make a person smile, even in the darkest times. In his younger years Blaine enjoyed a short stint in the military before moving on to his career as a professional truck driver. Once on the road he took a job with Stark International and began to learn all the do's and don'ts of running an oil processor. These skills would eventually lead him to his second home as an Oil Processor Technician for Framatome in Kincardine, Ontario. In his spare time Blaine enjoyed time with family & friends, hockey, Nascar, movies, and all things car related. He is most noted for ripping up and down the local highways in his treasured Shelby! Blaine is survived by his loving wife Jessie, son Cole, daughters Brittany (Aaron) and Haley, mother Marie, father Dennis, sister Carla (Cory), brothers Glenn (Meagan), and Cory, his grandparents Herman & Elsie and Sylvia, and stepmoms Candy and Sharon. Blaine will also be missed by his grandchildren Chayse, his princess Brielle and Leo by whom he was fondly referred to as "Goompa" - a role he took very seriously and enjoyed to the fullest. Also survived by aunts Beverly (Richard), Denise (Pete), and uncles Perry, Jim, and Dale (Carol). Blaine is predeceased by his grandfather Noble and uncle Carmen. Funeral arrangements are under the joint direction of MacKenzie & McCreath Funeral Home, Lucknow Ont. and D.S. Crowell & Son Funeral Home, Sheet Harbour N.S. A private family visitation and funeral will be held. Everyone is welcome to join the family following the funeral at 2 p.m. September 14, 2020 in St Lukes Church Cemetery, Liscomb for the burial. Please adhere to social distancing guidelines. A Special Thank You to the Lucknow Fire & Rescue first responders. Your kindness and compassion will always be remembered and appreciated. Online condolences may be directed to www.crowellsfuneralhome.ca
To plant a tree in memory of Blaine Hubley, please visit Tribute Store
Monday
14
September