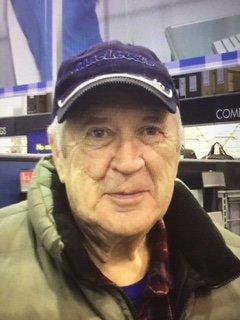 Please share a memory of Dale to include in a keepsake book for family and friends.
View Tribute Book
Age 81, of Dartmouth, passed away Monday, January 13, 2020 in Dartmouth General Hospital, with his loving wife by his side. Born in Sheet Harbour on March 16, 1938, he was a son of the late James and Johanna (Rhyno) Lowe. Dale is survived by his wife, Linda; daughter, Bonnie (Leslie), Prospect; sons, Kevin (Sandy), Calgary; and Royce (Lynn), Sheet Harbour; grandchildren, Jennifer (Rollins), Jason, Decker, Grace, and Gavin; great-grandchildren, Morgan and Benjamin; sister, Edythe Morash, Dartmouth. He was predeceased by brothers, Barry, Audrey and Noel. Dale joined the Navy in 1956, and retired after 25 years of service as a radar technician. He then spent several years working in forestry. Dale was instrumental in starting Eastern Shore Shipping, which ran from 1989 - 1992, at which time it became Westside Stevedoring. A strong, gentle, quiet man, Dale enjoyed spending time outdoors. He loved working in the garden, taking long drives in the woods, hunting and fishing with friends, playing cards and helping his neighbours with small jobs whenever he was able to. He enjoyed spending time with his friends, sharing stories and reminiscing about his time in the Navy, which he loved. Later in life he decided to try his hand at woodworking, creating many projects for family and friends. He liked keeping busy and took great pride in whatever he did. Cremation has taken place. At Dale's request, no service will be held. A Celebration of Life will take place at a later date. Memorial donations may be made to the Heart and Stroke Foundation, The Kidney Foundation of Canada, or a charity of your choice. To honour Dale's life, we ask that all who wish, to raise a glass with friends in his memory. Online condolences may be directed to: www.crowellsfuneralhome.ca
To plant a beautiful memorial tree in memory of Dale Lowe, please visit our Tree Store

A Memorial Tree was planted for Dale
We are deeply sorry for your loss ~ the staff at D.S. Crowell & Son Funeral Home Ltd
Join in honoring their life - plant a memorial tree
Online Memory & Photo Sharing Event
Online Event
About this Event

Look inside to read what others have shared
Family and friends are coming together online to create a special keepsake. Every memory left on the online obituary will be automatically included in this book.
View Tribute Book
Services for Dale Lowe
There are no events scheduled. You can still show your support by planting a tree in memory of Dale Lowe.
Plant a tree in memory of Dale
Share Your Memory of
Dale
Upload Your Memory View All Memories
Be the first to upload a memory!
Share A Memory
Plant a Tree